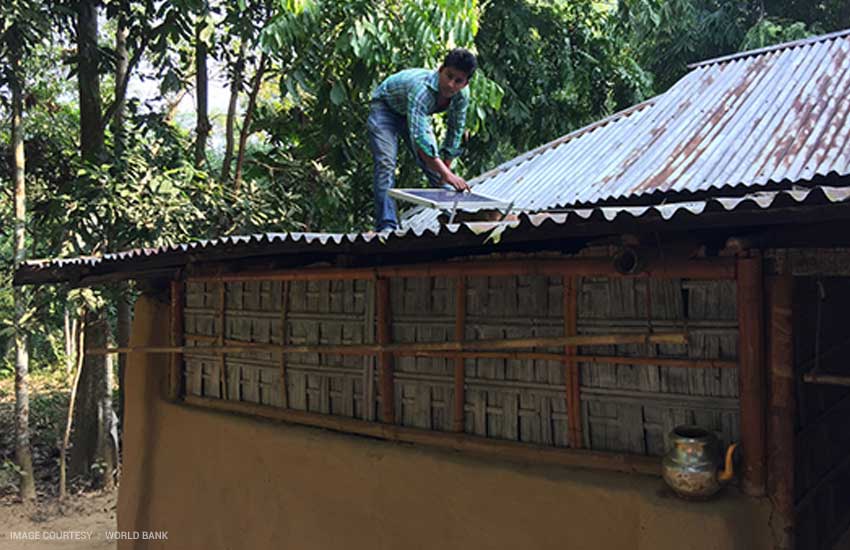 Much of the world population, especially in South Asia, Africa, and parts of Latin America, still lives without electricity or running water. In small villages, hundreds of millions of families, mostly subsistence farmers, cook and heat their homes by burning wood, cow-dung, or kerosene. The fumes from these open fires or stoves are a leading cause of sickness and premature death among the rural poor in the developing world. Not only that, but children in such homes lack night-time illumination to study for school, setting back their education. Also, water must be carried to the home in containers from wells or rivers often a kilometer or more away, which is exhausting and time-consuming as well as limiting or preventing proper hygiene.

Now that the cost of photovoltaic cells has fallen precipitately (and continues to fall), solar offers optimum solutions to these problems. Already in 1996, the world-famous Grameen Bank, which pioneered microlending to the rural poor, had begun Grameen Shakti, a solar-home program in rural Bangladesh. Families took out microloans to pay for small—as little as 10W—rooftop solar installations, enough to power lights and an electric stove. An early difficulty was that, in a conservative Muslim society, it was not considered proper for housewives to be home alone when male workers were installing panels on their rooftops while their husbands were out working in the fields. So Grameen Shakti trained women as installers, which not only resolved the issue but gave hundreds of women a marketable skill outside the home. The program ended in 2016, having installed hundreds of thousands of solar rooftops and trained thousands of local youth both male and female as installation and maintenance technicians.

As of 2017, thanks to an expanded program funded by the World Bank, over 3.5 million homes in Bangladesh were generating their own electricity from the sun, and the program was still growing, having created 70,000 direct jobs. Communities are reporting a significant increase in the quality of life thanks to better, safer, and cheaper lighting and the ability to power electrical appliances, TVs, and radios. Remote and poor families can now hear weather forecasts on the radio and watch the news on small TVs, which becomes more than just a luxury in a country that frequently faces severe weather. Moreover, programs are now allowing solar-powered households to sell electricity to families who have not yet been able to install their own rooftop panels. This is leading to the creation of so-called microgrids in villages in India, Bangladesh, Myanmar, and Kenya, among other emerging-market countries.

One key new benefit of solar rooftops and microgrids is the ability to charge cell phones. In the countryside of the global South, installing networks of landlines is prohibitively expensive (and unprofitable). As a result, mobile phones are already critical to business, health care, and personal communications in those areas. Companies have moved in to build cell-phone towers there, mostly powered expensively by diesel generators. But as village microgrids become more frequent—and as the mobile-device customer base in these areas correspondingly enlarges—they can power cell-phone towers nearby. 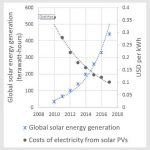 Microgrids and mobile devices in poor rural areas offer another solution to a problem potentially exacerbated by the use of solar power for another critical purpose: irrigation. Solar-powered pumps are now affordable, often via microcredits, by poor farmers. But this is leading, especially given the impacts of global heating, to over-pumping of groundwater (a problem that also afflicts wealthier regions like California’s Central Valley). Solar pumping comes with almost no marginal costs. That means pumps can keep running even when water is not really needed or is used for low-value or water-loving crops.

Linking irrigators into electricity grids may be an answer. In a pilot scheme in India, when farmers were not connected to the grid, they used all their solar energy for irrigating their own and neighbors’ fields. Once they were connected to the grid, they sold as much power as they could and used only 35% of what they generated for pumping. Solar power sales thus became an additional source of income for farmers. This could be done via microgrids in areas too remote for connection to the national grid. Cell phones, meanwhile, could provide the medium for local power markets as well as education on irrigation and cultivation best practices.

All this may seem a long way, in every sense, from solar rooftop installation in Plano or Austin, Texas. But it’s been said that solar energy is the most democratic alternative to nonrenewable sources—the least expensive, the least centralized, the easiest to install and maintain. Gradually, rooftop by rooftop, neighborhood by neighborhood, country by country, clean, cheap solar energy is bringing together everyone under the sun.